Netherlands - Looking to gain experience in the big league

Netherlands have played in 3 world cups in 1996, 2003 and 2007. Peter Borren captains them this time with Peter Drinnen (Australia) their coach. They have a World Cup win-loss record of 2-12. They have had recent success after defeating Bangladesh and Zimbabwe in 2010.

Weaknesses: The bowling attack is limited, and they lack any quality in the spin department.

World Cup 2011 Group B Prospects: India and South Africa to emerge on top 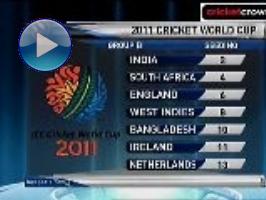 This clips has Mark Waugh, Greg Blewett and co examining the World Cup 2011 Group B Prospects where India and South Africa to expected to emerge on top emerge on top.

The other contenders - England, Bangladesh, West Indies - are also look at to see which teams a likely to make it to the knockout stages.

Associated teams representing Canada, Netherlands and others have been using ICC's Cricket Centre and its advanced bolwing machine to help fine tune their practice against the worlds best bowlers ahead of the 2011 World Cup. Feb 2011