England were denied a victory as the final Ashes Test ended in a thrilling draw because of bad light. England won the Ashes series against Australia 3-0.Set a target of 227 by Michael Clarke's ambitious declaration, England needed 21 more from 24 balls with five wickets in hand when play was called to a halt by the umpires at 7.36pm. Aug 2013 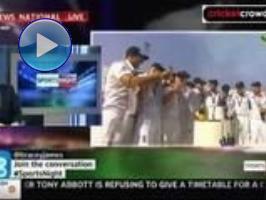 Expert Analysis & Views
No comments received so far. (U09)