Australia celebrated in style after Ryan Harris (5-28) dominated the last day as they claimed an Ashes whitewash-clinching victory by taking the series 5-0.

Chris Rogers had earlier recorded his highest Test score with a knock of 119 to inflate Australia's lead before they were dismissed for 279. 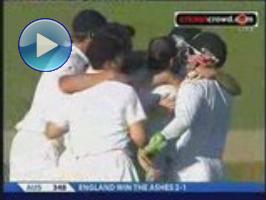