Stand-in skipper Kraigg Brathwaite (66) batted resolutely but Boult and Southee had the Windies on the back foot.

Boult and Southee put on 61 for the last wicket to push NZ to 373. They took 4 wickets between them to leave the Windies under the cosh at stumps.

The Windies finished the day 215-8 in reply to the Black Caps' 373, still 158 runs behind and staring down a big first innings deficit.

Kraigg Braithwaite: The next Brian Lara 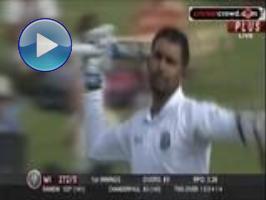