Australia won the toss and chose to bat, with Finch and Short hitting fifties to help them post 271 all out. Ngidi took a career-best figures of 6-58.

In reply, Malan smashed 129 not out from 139 balls to lead the home side to victory with nine balls to spare. He put on 90 with David Miller (37 not out) to deliver the victory. 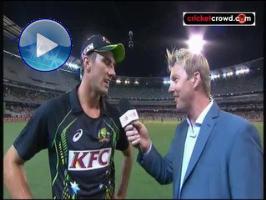