Dean Jones made a massive miscalculation when he asked Curtly Ambrose to remove his white wristbands. The angry Ambrose then decimated the Aussie batting line up taking 532 as the Windies won by 25 runs to go 1 up in the finals series. Benson and Hedges World Series 1st Final SCG 16 Jan 1993. 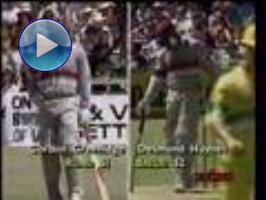 Bowling
No comments received so far. (U09)