England regained the upper hand as Australia were given a huge fright by a Ben Stokes century and another fearsome Jofra Archer spell.

Marnus Labuschagne created history becoming the first ever concussion substitute for the injured Steve Smith. Labuschagne posted a fifty to give Australia some hope.

Australia survived a late slump to cling on for a draw. Archer (3-32) bowled several menacing spells to rock Australia and spinner Jack Leach spun a web on the worn pitch. Travis Head and Pat Cummins batted resolutely in fading light until stumps.

Earlier, Stokes' unbeaten 115 allowed England to declare on 258-5 after a free flowing hour after lunch. 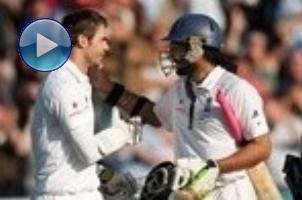