4th Test Preview: Can Australia get over Stokes nightmare? 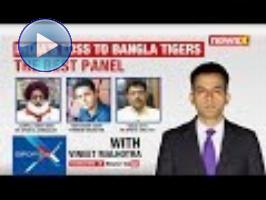 Historic T20 Loss: How did India lose to Bangladesh?

Check out our other "Expert Analysis & Views" videos

Smith was the difference in Ashes win

Analysis: How Stokes pulled off the miracle Ashes win? (Leeds)

Smith's 144 is the best of his career: Johnson (Edgbaston)

How England won the World Cup in a dramatic tie (Lords)

Hussey: Shakib Al Hasan is worth 2 players for Bangladesh

Analysis: Pressure catches up with England in shock loss to Sri Lanka (Leeds)

Who will come out on top? Michael Clarke on India-Pakistan rivalry

2019 World Cup Preview: How the teams line up ahead of the opening salvos

England has impressed me, favourites with India: Glenn McGrath

Analysis: Dhawan roars back into form with century against Hong Kong (Dubai)